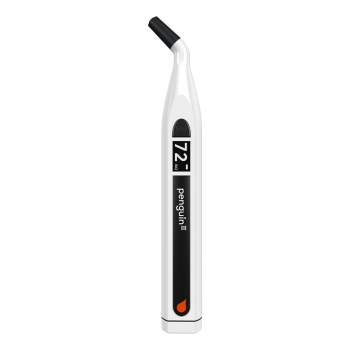 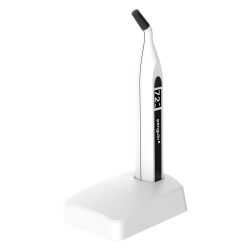 Click Here! to refer the catalog and enter the manufacturer name and implant system name you wish to purchase in the below form.

Add to Cart OR
Request Info

0 reviews | Write a review
Description
Reviews (0)
The Penguin II helps dentists quickly determine a measurement of implant stability to eliminate doubt as to whether it is safe, or unsafe, to load the dental implant.


The advantages of Penguin II for implant dentists are as follows:


What is an ISQ Scale?


Dental implant stability can be measured via resonance frequency analysis and presented as an ISQ (Implant Stability Quotient) value. The measurement scale, which ranges from 1 to 99, is a scientifically-backed reference point to support the clinician’s decision of when to restore, whether at primary insertion or over time, depending on the unique circumstances of each case.


Click the video below to understand the process of implant stability measurement using the clinically proven ISQ scale of the Penguin II.

About the Penguin
The Penguin II allows the practitioner an easy, accurate and affordable solution to Implant Stability Quotient (ISQ) implant stability measurement. With the Penguin, you can easily monitor osseointegration of your dental implants and eliminate any doubt. Whether you are checking the ISQ of an implant at immediate placement following an atraumatic extraction or before definitive restoration impressions, the Penguin II is the predictable and accurate choice to give you comfort your implant is stable and ready to load. Today’s implant dentistry trend is to use short, or no, healing periods before loading, so it is imperative to ensure proper stability to reduce the risk of failure and have confidence the implant is ready for loading. The Penguin uses multi-use autoclaveable Multipegs that are calibrated to each individual implant brand and system.

Resonance Frequency Analysis (RFA) was introduced to implant dentistry more than 20 years ago, where a peg attached to an implant causes vibration frequency that is picked up by a device and presented as an ISQ. The measurement scale is from 1 to 99 ISQ, which correlates strongly to the micro mobility of the implant that is dependent on bone quality and osseointegration. A baseline value can be taken at placement and another before loading to determine the degree/measurement of osseointegration.

The Penguin RFA is cordless, light-weight, and very user friendly. It is also cost-effective as the Multipegs (i.e., transducers) are fully autoclaveable for multi-use and calibrated.

The Penguin II has a 2-year warranty.

Frequently Asked Questions
Q: What are the benefits of using MulTipegsTM?
A: MulTipegs are made from durable titanium with sealed magnets, and can be autoclaved for sterility. They are calibrated against a reference for consistent ISQ-values which in turn makes it easier to compare different implant systems. The laser marked MulTipegs are tissue friendly and leaves no foreign material inside the implants*. They are also cost effective since they are reusable.

Q: Does Penguin II produce the same ISQ values as Osstell ISQ?
A: The Penguin II used together with the reusable MulTipegTM, give in principle the same ISQ readings as Osstell ISQ with the disposable SmartPegs. However, MulTipegs are calibrated against a common standard which means that the ISQ values are comparable between different implants. MulTipegs must be used to get the benefits of the calibrated system.

Q: Are the reusable MulTipegsTM compatible with the disposable Osstell SmartPegs?
A: Although the two systems in principle give the same ISQ values for an implant (however see the question above about the calibration standard), they are not directly compatible. If Penguin II is used with Osstell Smartpegs, the measurements need to be adjusted according to this table. If an Osstell instrument is used with MulTipegs, this table is used instead. This is because MulTipegsTM and Smartpegs® are made from different materials (titanium vs aluminum). MulTipegs must be used to get the benefits of the calibrated system.

Q: How many times can I use the reusable MulTipegTM ?
A: If a MulTipegTM is used, washed and autoclaved, it will mean some wear. Eventually, the MulTipegTM will be worn in such a way it should be replaced. How many uses that will take, differs dependent on the way it is handled, but in any case it is guaranteed for 20 autoclave cycles.

Q: What is the MulTipegTM material?
A: The reusable MulTipegTM is made in titanium, a highly biocompatible material which guarantees that no foreign material or substance comes in contact with the implant during the measurement.

Q: How do I work with the system under sterile conditions?
A: If the instrument is used together with a sterile cover, it can be used in a sterile environment. Both the MulTipeg and the MulTiPeg Driver are autoclavable.

Q: How long before the batteries have to be recharged?
A: Fully charged batteries will provide more than one hour of continuous measurements. Since the instrument normally is used only for a short while at a time, it means it can be used for many sessions before recharging.

Q: Which cut-off ISQ value should I strive for?
A: Dependent on the surgical protocol (one- or two-stage), loading protocol (immediate, early, standard, prolonged) and clinical situation (i.e. single tooth, full bridge), the ISQ value requirement differs. More information about how to use the ISQ-value can be found here.

Q: Is the method documented?
A: Resonance Frequency Analysis applied on implants is documented in more than 700 peer-reviewed published articles.

Q: Is the published Resonance Frequency Analysis (RFA) documentation valid for Penguin II?
A: The result of a measurement with the Penguin II instrument is presented as an ISQ-value. Internal research show that Penguin II together with MulTipegs produce the same results as other instruments for the measurement of ISQ.
Instructions for Use
Product system
The Penguin II system consists of a hand-held instrument and a reusable MulTipegTM. A charger is delivered together with the instrument as well as a stainless steel driver for attaching the MulTipegTM to the implant.

STEP 1
Select the correct MulTipegTM for the implant being measured.

STEP 4
The instrument emits a beeping sound when it starts measuring and another sound when the ISQ value is presented on the display a second later.
Comparison of Penguin RFA & Penguin II Implant Stability Monitors - How are they Different?
Whether you select the Penguin RFA or the new Penguin II implant stability monitor for your dental practice, you can rest assured that you are making an excellent investment for your practice, your patients, and your own peace of mind. Using Penguin RFA technology and the ISQ measurement scale helps dentists quickly determine a measurement of implant stability, helping support the decision of when to load the dental implant.


Both Penguin RFA and Penguin II provide accurate, reliable measurement of dental implant stability via RFA measurement methodology, and either is an excellent choice for any dentist placing or restoring dental implants. Both instruments utilize cost-effective MulTipegs, which are available for all major implant systems and are autoclavable for up to 20 uses, ensuring the best return on investment in the industry.


Significant updates on the Penguin II include:
Design Changes

The Penguin II has updated aesthetics with important clinical purposes. The Penguin II has new flatter sides bring increased comfort, better grip, and better leverage when in the hand. An all new LED display screen is more sleekly integrated into the design, increasing readability. Even with a new design, the Penguin II is easily recognizable as a member of the Penguin family.

The Penguin II Battery is both Rechargeable & Replaceable. Perhaps the biggest departure between the Penguin RFA and the Penguin II is the new swappable battery pack. While the Penguin RFA features a durable, rechargeable battery, it is not user-replaceable. This means that if the battery were to go “dead” out-of-warranty you would need to replace the entire unit at your expense. The Penguin II features a sleek, free-standing vertical charging stand, allowing for easy placement and wireless charging of the device. With the new Penguin II, when the battery reaches the end of its life, it can be replaced in the office with ease at a fraction of the price of a new model.


Your Review: Note: HTML is not translated!

Enter the code in the box below: