Dental Implants problems: Why Are Tooth Implants for 1% of Population?

As highlighted at the 2011 Chicago Midwinter Meeting we have dental implant problems in our industry. The problem does not lie with failure rates or overall patient care, but with the alarming number of tooth implant candidates that are not receiving them that could. According to a panel discussion on February 25th headed by Dr. Gordon Christensen, DDS, MSD, PhD, of the nearly 180 million U.S. adults who have had a tooth extraction or lost at least one tooth, only 1% of them have received a tooth implant.

Specifically, Dr. Christensen noted that in general we have around two hundred (200) million adults living in the United States and of these two hundred (200) million; one hundred and seventy eight (178) million have had a tooth extraction and only around 1% of this population has had a tooth implant. This is an alarming dental implant problem where we must ask ourselves as dentists whether tooth implants are simply too expensive or out of the reach economically for the general population – especially in a bad economy.

As outlined in our other articles, achieving atraumatic extractions is a hot topic mainly due to the ability of dentists to preserve bone for immediate implant placement. Atraumatic extractions are also a highly desired topic or discussion point in dental implant courses around the country. Although, we as dentists, are interested in tooth implants, why is the general public not taking advantage of what is generally thought of as the best alternative for single tooth replacement for patients? The answer is generally the cost in most cases.

However, even with the dental implant problem noted above according to a study performed by iData Research, the U.S. market for tooth implants will again have double-digit growth by the year 2013 and will lead the dental prosthetic market to reach more than 82 million prosthetic placements by the year 2016. According to the CEO of iData, Kamran Zamanian, by the year 2016, over 20% of general practitioners are expected to place tooth implants. As like other new technology, the question is whether the costs will be reduced in the near future to meet this goal, or will an improved economy allow for the costs of obtaining a tooth implant to not be out of reach for the general public? Only time will tell. 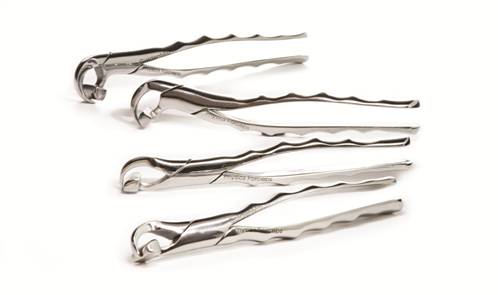 Learn more and eliminate tooth extraction frustration forever at www.physicsforceps.com and by calling 1-877-987-2284. Atraumatic extractions have never been easier.

Back to More Reading