The history of dental extraction forceps is very old and goes back to the time of Aristotle (384 to 322 BC) where Aristotle described the mechanics of oral surgery forceps as "two levers acting in contrary sense having a single fulcrum." This was over 100 years before Archimedes studied and discussed the principles of the lever.

The first person to apply one lever acting alone (i.e., an elevator) was Abulkasim (1050 to 1122 AD), where he applied such elevator under the tooth to remove it from its socket. What this tells us is that, in general, the principles of biomechanics as we discussed in Biochemistry Using Dental Extraction Forceps have been considered to extract bad teeth for thousands of years, but no dental instruments allowed for such principle to be properly applied until the Physics Forceps.

The most commonly used devices used for tooth extractions are levers and inclined planes. The concept or term simple machine is used regularly to describe basic devices that increase the amount of force applied. These devices can include an inclined plane, a lever, a wheel, a pulley, and a screw, which each transmit or modify force or torque in different manners. 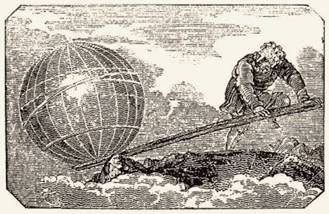 Physics Forceps – Demonstration of Leverage
A wedge is technically a moving double-inclined plane, where by applying a relatively smaller force than the load required to move the object it can overcome a large resistance. The mechanical advantage of a wedge depends on the ratio of its length to its thickness, where a shorter wedge that has a wide angle performs a job quicker, but it also requires more force than a long wedge with a more acute angle.

When dental elevators and periotomes are used to start the luxation of a tooth extraction they use the mechanical advantage of a wedge when they are pushed along the tooth root. Also, the elevator can be viewed a lever where it lifts the tooth from its socket using a boney margin as the fulcrum.

Once the wedge action of the elevator is applied to a tooth in the tooth extraction process and causes initial mobility, dental extraction forceps are used to grasp and rock the tooth back and forth followed by rotating the tooth within the socket. By moving the tooth in this manner it causes the expansion of the socket and separates the periodontal ligaments.

Dental extraction forceps can actually be thought of as two first-class levers, connected with a hinge. The long side of the lever is the force applied to the handles, the beak on the tooth acts as the short side of the lever, and lastly the hinge acts as a fulcrum. As a result, the force applied on the handles is increased greatly to allow the dental extraction forcep to grasp the tooth with a large amount of force. Please note that none of the force is used to perform the tooth extraction, where increased force may crush or fracture the crown of the tooth.

The handles of the dental extraction forcep allows dentists to grasp the tooth, but ultimately does not assist in the mechanical advantage discussed in "Biochemistry Using Dental Extraction Forceps" to remove it. Conventional exodontia requires two equal forces applied on the tooth (squeezing) combined with a third force, which is the movement of your arm, to release the tooth from its socket. This is similar to attempting to pull a bottle cap off a bottle using a pair of pliers versus using the advantage of a lever to remove the cap by using a standard bottle opener.

Physics Forceps – Demonstration of Leverage: Class I Lever
This is far from a novel concept, but it you think about it, traditional dental extraction forceps are like the pliers in the examples above and clearly do not make sense in these situations.

Learn more and eliminate tooth extraction frustration forever at www.physicsforceps.com and by calling 1-877-987-2284. Atraumatic extractions have never been easier.

Back to More Reading
MADE IN THE USA DETROIT, MI
© Copyright 2022 GoldenDent Inc. All Rights Reserved. Privacy Policy | legal
PHYSICS FORCEPS is a registered trademark of Directa AB | Accessibility Statement